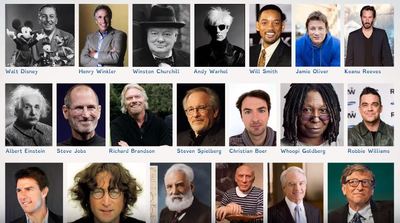 There seem to be a high proportion of famous dyslexics, which reveals that the challenge to overcome dyslexia also results in developing imagination and perseverance to not give up and achieve success.  Dr. Harold Levinson, child psychiatrist at the Levinson Medical Center for Children with Learning Disabilities, avers that leaning to sidestep dyslexics’ hidden and frustrating barriers forces them to develop and utilize hidden talents.

One of these people is actor Whoopi Goldberg, one of only twenty actors who have won a Grammy, Oscar, Tony, and Emmy award.  Ms. Goldberg was called lazy, dumb and stupid as a child. All she did was think differently. She would imagine she was another species or lived in other time periods. Her ability to think differently she attributes to her success. Moreover, her mother was very supportive which attributed to her confidence and success and she tells parents to pay attention. The information is there, it is just seen and expressed differently.

Another famous person is the legendary film director, Steven Spielberg.  As a child, he was bullied by his peers and school administrators attributed his behavior as laziness.  He channeled his energies into making movies and even co-wrote the 1980’s movie, “The Goonies”, about a group of children who were quirky and outsiders.  When Mr. Spielberg learned about his dyslexia when he was already in his 60’s, he stated that it was like “the last puzzle piece to a great mystery that I’ve kept to myself.”

Another person is Octavia Spencer, an actor who has recently taken Hollywood by storm. Although she was paralyzed about reading aloud in first and second grade, it was discovered by her teachers that she had such great auditory learning that she was tested for being gifted. She, as Ms. Goldberg, had great support from her mother. Ms. Spencer stresses that dyslexia should not prevent children from pursuing their dreams. She has stated that “it doesn’t really mean that you’re not intelligent -it just means that your brain functions differently.”

Having dyslexia comes with so many wonderful gifts and talents. Learn to use them and embrace them and you can be a STAR!